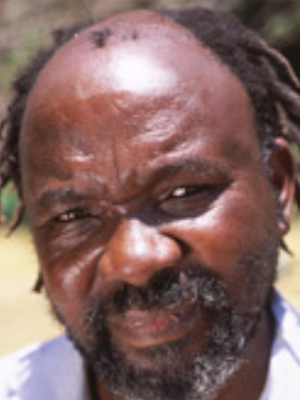 Nicholas Mukomberanwa was born in the Buhera district of Zimbabwe in 1940. His childhood was spent in a rural environment which was fundamentally to influence his later life and work (“a wonderful place to grow up – surrounded by mountains and rivers with places full of trees”). It was at the Serima Mission school where he was introduced to the discipline of wood-carving as well as the images of formal worship (Christian) and those of traditional African art.

Nicholas to this day, acknowledges the importance of this initial influence (“the seed of art was sown in my heart”), but whereas Serima had provided a rigid and secure framework in which to make early explorations into artistic realms, the very particular philosophy followed by Frank McEwen (whom he met in 1962) hung upon a belief in allowing the natural, latent talents within the artist to emerge, with little formal guidance and ‘training’.

This one element alone seems, in retrospect, the most important in the refinement of Nicholas’ ideas and ambitions. While still working in full-time employment (as a policeman) Nicholas began to carve.

He had now found his natural area of expression and his work was soon included in important exhibitions internationally – to considerable acclaim. Rather than allowing this early success to influence his development, Nicholas remained aloof, choosing to question himself rigorously; “I wanted to learn more to help me to resolve problems; there was always a question mark in my head – why is it good – why is it bad?” This is an attitude that still guides him today. “There is one thing in my life that determines all else. I want to be a great artist – I want to work so I an express what I feel and think truly myself in my own way.” A constant searching for new forms of description has resulted in some quite fundamental changes in direction within the work.

In the very beginning his portrayal of West African images as well as scenes from the Bible were rounded and very simple. Work from the Sixties shows a much more stylised, patterned use of geometric as well as clear, curvaceous forms (the “feeling” behind these works, as opposed to any formal type of influence, has been described by Frank McEwen as “ancient near Eastern”).

During the Seventies, using the hard, black Penhalonga Serpentine, the work became characterised by the confident use of sharp lines and planes, and of ambitiously abstracted form. Some of his most powerful sculpture was made in the Eighties and seem to combine elements of earlier discovery – nothing is wasted. Sharp lines and hard planes are used with confidence alongside sweeping curves and deeply etched surfaces. The aspect that so distinguishes this period of work is an absence of doubt and a conviction that can only come from genuine investigation and a courageous search, both of the internal spirit and of the natural physical world. He is both knowledgeable and proud of the Shona culture – it provides powerful motivation for his work and seems to demand that he strive towards the preservation as well as the portrayal of it in his sculpture.

Nicholas is considered to be one of Zimbabwe’s most gifted and successful sculptors and is highly regarded internationally. His work can now be seen in the permanent collections of many international museums.