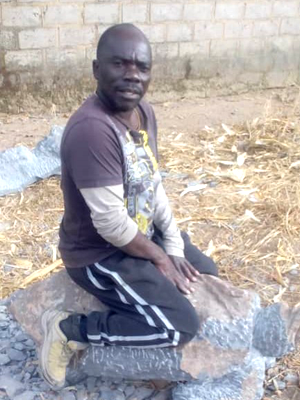 He was born in Mt Darwin 1973, 13 November started sculpting in 1988 on part time since he was still at school, after moving to Guruve where he worked with his brother Edronce Rukodzi one of the famous sculptors of the first generation.

After school in 1992  he continued working on sculptures full time, in 1993 became a teacher for 1 year and left and joined Tengenenge art community 1994 same year ,he moved to Harare where he worked with Raymond Chirambadare. In Harare he met artists like Joe Mtasa and worked alongside him introducing him to Chapungu where Tendai started working with Chapungu gallery, Ramambo Galleries, Stone dynamics, Pierre Gallery and many galleries in Harare.

From there Tendai never looked back, his works has intensively group exhibited in many galleries overseas namely, Japan, South Korea, Israel, Germany, Belgium, Austria, UK where he was published in the magazine, Australia where he Was highly recommended  in his figurative abstracts, USA and once published in San Diego media and Florida newspapers.

In 1999 Tendai Rukodzi rejoined Tengenenge art Gallery and became famous and  one of the top selling artists  where he  worked alongside artist like Bernard Matemera. In 2002 went back to Harare at Tsindi Gallery where he is working from  currently. 2005 sprung to The Netherlands for workshops and exhibitions with the Porchery Gallery in Tilburg at Riel at Brabarnt from June to August and had chances to visit many galleries same year in the Netherlands like De Buffel gallery.

2006 went to Germany for workshops and exhibitions with the LittleZim and did an exhibition in Donauworth,Munich where he went famous on the published article of the exhibition opened by the helping City Mayor of Munich organized by HAMUPA (Harare Munich Partnership).The same article was published in several different media  in Munich,South Africa and Zimbabwe including France24.
Tendai is now currently working at Harare Airport rd Tsindi Gallery.

He had participated in the selected 100 artists in the love theme exhibition organized by Chitungwiza art center. Tendai participated also in the 10 selected artist who were chosen by the Shona Spirits Gallery from  German  in the work of Huge monumental sculptures at the Buddha gallery in Portugal where he participated with more than 8 monumental statue. Tendai is humorous and enjoys working on all type of stones.