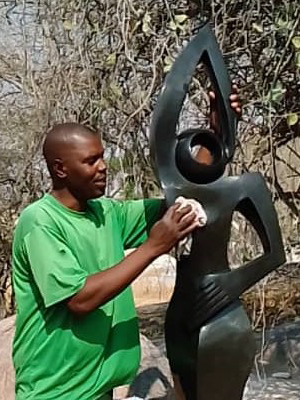 I grew up on stone curver’s environment were I saw my next door neighbor famous artist Nesbert Masunda (Mukomberanwa cousin) doing his artworks together with my older brother Kaitano Ngamu and others. They both inspired me, I practiced with them mostly after school, weekends and holidays upto be good in creating my own small sculptures. I become a full time artist in 1997 after completing my secondary. I got married 2002 and blessed with four children (2 boys & 2 girls).

My work have gone to several countries such as Canada, Germany,U.S.A, China etc. I participated on several competitions and exhibitions such as NAMA, National gallery of Zimbabwe annual exhibitions, Kristen Delhi

competitions, Chitungwiza art centre exhibitions, first and second agio symposium. I was awarded second prize winner on 2015 Rebirth exhibition with a sculpture titled “in my fore father’s jacket” and become best artist on 2016 Journey exhibition with a sculpture titled “inspired to move on” at Chitungwiza Art Centre. I then qualified with both sculptures to exhibit on 2017 annual exhibition of National gallery of Zimbabwe. I mostly enjoy working on stones such as springstone, opal, combalt, verdite etc. My workplaces are Chitungwiza Art Centre and at home 15020 unit ‘o’ Seke Chitungwiza.