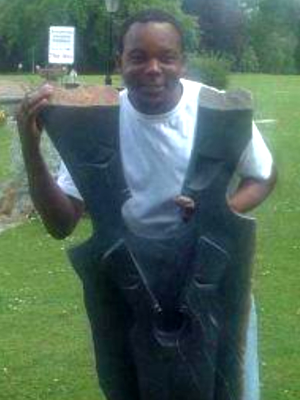 Sam was initiated into the sculpture movement in Zimbabwe when he was only 15 years old in Tafara with a few local artists, after four years he was recognised by the great sculptor Amos Supuni, his neighbour. He worked as Amoss assistance and apprentice for three years before he was approached by other well-known artists Joseph Muzondo and Taylor Nkomo and made a career move to be their apprentice, for one year each respectively to gain more experience. It was with them that he was first introduced to the Chapungu Sculpture Park, which he regularly visited to help other sculptors.

In 1999 Sam was invited to apply for the Residency Programme at Chapungu Sculpture Park in Harare which was accepted and where he worked in his own right for two years. It was here that he was encouraged to diversify by creating larger pieces of work and further his vision by communicating with other sculptors at the Park.

Since 2001 Sam has been working on his own from his house in Mabvuku, which he shares with his family.

Sams figurative socially aware work can be described as surreal cubism, which he highlights by the intelligent use of the stone by leaving it mixed with polished, textured and raw overtones. His work is highly original and for such a young artist greatly regarded as a rising star amongst sculptors. Exhibitions and attended workshops include South Africa, Germany and England he has also been heavily promoted in the U.S.