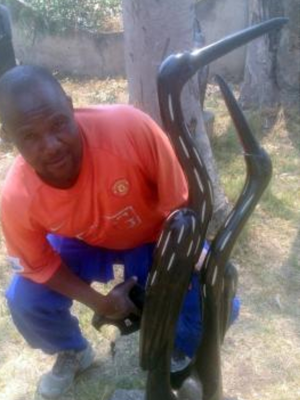 Specializing in stone bird sculpting is one of Stephen Chikeyas major strengths as he tries to deviate from the traditional form of sculpting in human figures and abstract pieces of art.

With birds of all sizes and shapes, Chikeya expresses his feelings and his view of the world. Chikeyas birds are no ordinary birds as they are imbued with a hidden meaning and sometimes they tell a story that unfolds at first glance. Spending a day with Chikeya was an awesome experience as it unveiled an exploration into his artistic mind. Growing up embracing the love for birds, Chikeya felt that he had to add some value to the species that he greatly admires. Chikeya depicts the human way of living in the birds that he carves.

In justifying why he puts more attention on bird sculpting, Chikeya said that besides his passion for birds, he wanted to be different from other sculptors and didn’t want to be a copycat, hence he had to come up with a distinct kind of sculpting.

As someone who took up sculpting when I was already a family man, I had to think of something that most sculptors back then were not venturing into so as to add variety to this kind of art. When I was still in college my teacher encouraged me to take up bird sculpting because he saw the vigour and prowess that I showed once I set my mind that I am going to come up with a bird sculpture, he said.

One of Chikeyas sculptures that grabbed my attention was a piece entitled Dialogue. It is a sculpture made out of springstone showing three birds standing on a flat ground with their black beaks, though not necessarily in contact with each other, peeking into the air which automatically shows that there is some form of conversation taking place amongst the birds.

By just merely looking at the piece of art, one would draw a conclusion that Dialogue is just like any other sculpture that when interpreted at face value would simply depict three birds simply making a conversation. The piece Dialogue, however, carries a hidden meaning in which the three birds represent the three principals in the unity government which currently exists in the country. The peeking beaks symbolise the talks that principals partook in coming up with a Government of National Unity (GNU).

The flat ground on which the three birds are standing signifies the consensus that the three principals reached in improving the Zimbabwean situation despite their different political views. The piece, Thanks Mum, also carved out of springstone, is self-explanatory, characterised as it is by two birds, one bigger and the other smaller. The bigger bird represents a mother whilst the smaller one represents a child. Using the beak, the mother is seen feeding the child. The piece translates to the nurturing love that most mothers have for their children.

Even though Chikeya focuses on birds, he also carves heads to avoid being monotonous in his work and so as to attract a wide variety of customers. Heads are only an expression of art without any specific meaning. Stephen was born in 1966 and has been inspired by the works of Picket Mazhindu, Nobert Shamuyarira and Washington Musonza, who later became his mentors. In 2005, he left his formal job to concentrate on sculpting.