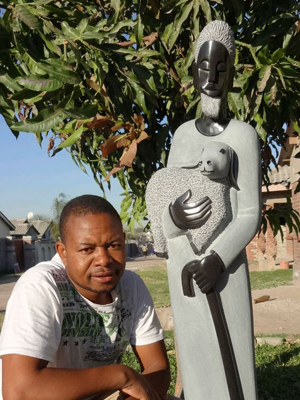 Stephen Murenza was born in 1982 in the rural district of Rushinga. He is from a family of six boys, five of whom are sculptors. He describes his two older brothers, Julius and Rufaro, as his most important mentors. Stephen started assisting them at the age of ten.

Stephen remained in school until he had completed his ‘O’ levels, but spent all his spare time learning how to finish his brothers’ sculptures and then, eventually, how to carve his own works.

In 2000 Stephen left his rural home and moved to Chitungwiza, a community near the country’s capital with a strong sculpting tradition, in order to further his skills as an artist and gain more exposure for his work.  In 2010 he found outdoor studio space in Harare, where he is now based.

Despite living in an urban environment Stephen says he still feels close to nature. “So many things inspire me,” he explains. “Every stone is a sculpture waiting to come out.  I like to carve what is meaningful in our culture and our lives.”

Stephen moves effortlessly between representational and abstract interpretations, experimenting with texture and form. There is a beautiful simplicity to his work. Whether it’s a bird in flight or a bathing woman, Stephen’s sculptures have movement and stillness at the same time.

Stephen’s distinctive sculptures have sold to collectors and galleries in Zimbabwe, South Africa, the UK, the US, Germany, Holland, Belgium, Australia, New Zealand and Canada.